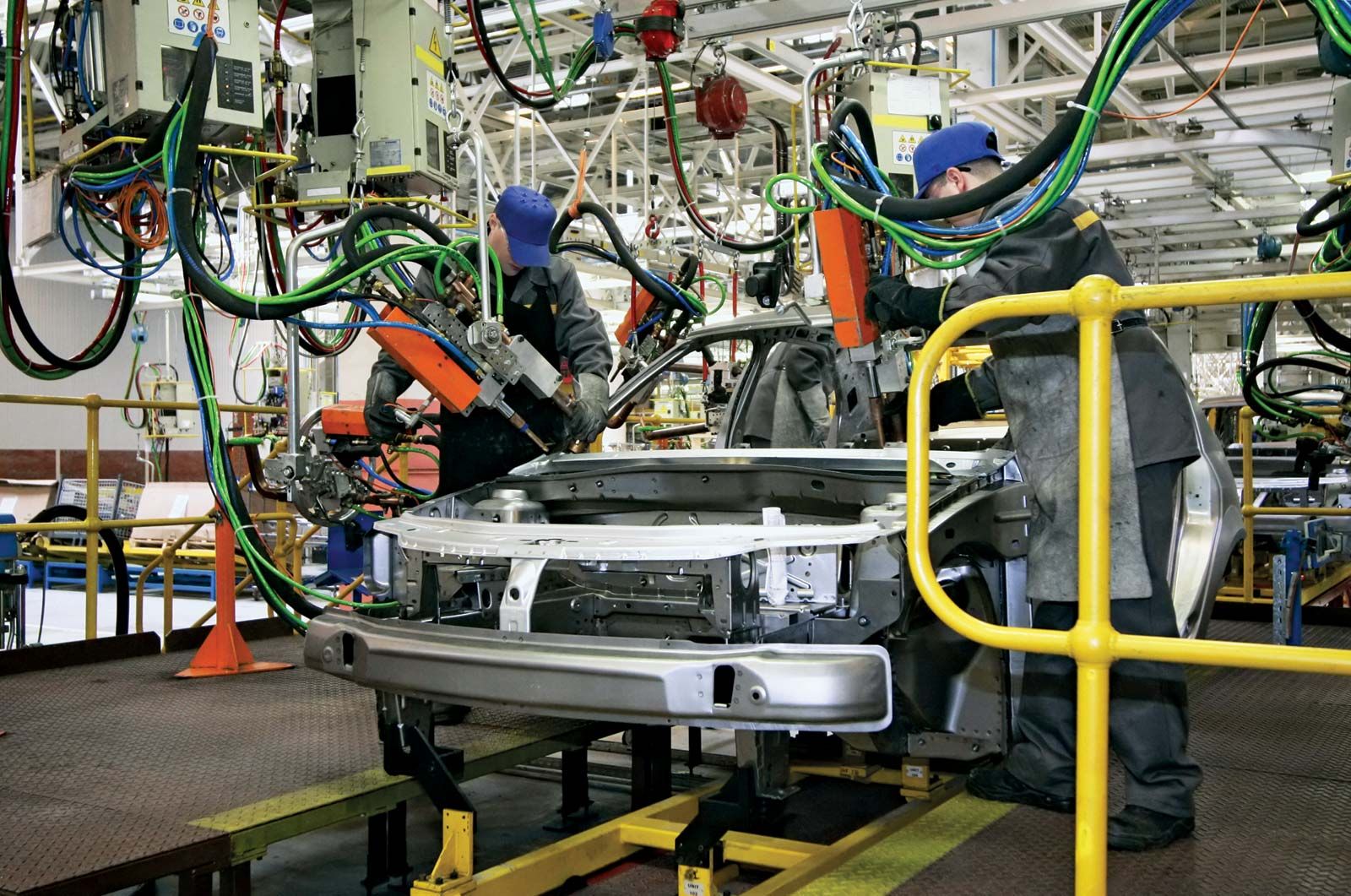 Although steam-powered road vehicles were produced earlier, the origins of the automotive industry are rooted in the development of the gasoline engine in the 1860s and ’70s, principally in France and Germany. By the beginning of the 20th century, German and French manufacturers had been joined by British, Italian, and American makers.

Developments before World War I

Most early automobile companies were small shops, hundreds of which each produced a few handmade cars, and nearly all of which abandoned the business soon after going into it. The handful that survived into the era of large-scale production had certain characteristics in common. First, they fell into one of three well-defined categories: they were makers of bicycles, such as Opel in Germany and Morris in Great Britain; builders of horse-drawn vehicles, such as Durant and Studebaker in the United States; or, most frequently, machinery manufacturers. The kinds of machinery included stationary gas engines (Daimler of Germany, Lanchester of Britain, Olds of the United States), marine engines (Vauxhall of Britain), machine tools (Leland of the United States), sheep-shearing machinery (Wolseley of Britain), washing machines (Peerless of the United States), sewing machines (White of the United States), and woodworking and milling machinery (Panhard and Levassor of France). One American company, Pierce, made birdcages, and another, Buick, made plumbing fixtures, including the first enameled cast-iron bathtub. Two notable exceptions to the general pattern were Rolls-Royce in Britain and Ford in the United States, both of which were founded as carmakers by partners who combined engineering talent and business skill.

In the United States almost all of the producers were assemblers who put together components and parts that were manufactured by separate firms. The assembly technique also lent itself to an advantageous method of financing. It was possible to begin building motor vehicles with a minimal investment of capital by buying parts on credit and selling the finished cars for cash; the cash sale from manufacturer to dealer has been integral in the marketing of motor vehicles in the United States ever since. European automotive firms of this period tended to be more self-sufficient.

The pioneer automobile manufacturer not only had to solve the technical and financial problems of getting into production but also had to make a basic decision about what to produce. After the first success of the gasoline engine, there was widespread experimentation with steam and electricity. For a brief period the electric automobile actually enjoyed the greatest acceptance because it was quiet and easy to operate, but the limitations imposed by battery capacity proved competitively fatal. Especially popular with women, electric cars remained in limited production well into the 1920s. One of the longest-surviving makers, Detroit Electric Car Company, operated on a regular basis through 1929.

Steam power, a more serious rival, was aided by the general adoption, after 1900, of the so-called flash boiler, in which steam could be raised rapidly. The steam car was easy to operate because it did not require an elaborate transmission. On the other hand, high steam pressures were needed to make the engine light enough for use in a road vehicle; suitable engines required expensive construction and were difficult to maintain. By 1910 most manufacturers of steam vehicles had turned to gasoline power. The Stanley brothers in the United States, however, continued to manufacture steam automobiles until the early 1920s.

As often happens with a new technology, the automotive industry experienced patent controversies in its early years. Most notable were two long, drawn-out court cases in Britain and the United States, in each of which a promoter sought to gain control of the new industry by filing comprehensive patents. In Britain the claim was rejected by the courts in 1901, five years after the patent application. In the United States there was a legal battle between Ford and the Association of Licensed Automobile Manufacturers over the Selden patent, which the association claimed as a basic patent on the gasoline-powered car. In 1911 the courts held the patent “valid but not infringed” by Ford. The main consequence of the decision was the formation of the predecessor of the Alliance of Automobile Manufacturers to supervise an agreement for cross-licensing patents, which was ratified in 1915.

The outstanding contribution of the automotive industry to technological advance was the introduction of full-scale mass production, a process combining precision, standardization, interchangeability, synchronization, and continuity. Mass production was an American innovation. The United States, with its large population, high standard of living, and long distances, was the natural birthplace of the technique, which had been partly explored in the 19th century. Although Europe had shared in the experimentation, the American role was emphasized in the popular description of standardization and interchangeability as “the American system of manufacture.” The fundamental techniques were known, but they had not previously been applied to the manufacture of a mechanism as complex as a motor vehicle (see work, history of the organization of).

The kind of interchangeability achieved by the “American system” was dramatically demonstrated in 1908 at the British Royal Automobile Club in London: three Cadillac cars were disassembled, the parts were mixed together, 89 parts were removed at random and replaced from dealer’s stock, and the cars were reassembled and driven 800 km (500 miles) without trouble. Henry M. Leland, founder of the Cadillac Motor Car Company and the man responsible for this feat of showmanship, later enlisted the aid of a noted electrical engineer, Charles F. Kettering, in developing the electric starter, a significant innovation in promoting the acceptability of the gasoline-powered automobile.

How EVs Are Changing the U

Bestcontent is a leading news magazine founded in 2019 by Amazing Workz Studios, India. We try to gather information on various topics and provide you with well-researched articles.